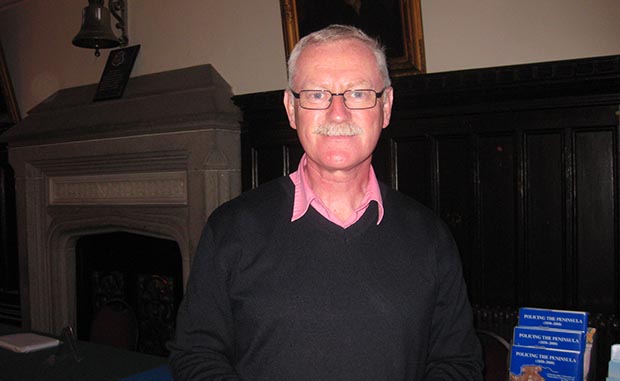 Simon carries out illustrated talks across the south west and beyond. His talks last between 45 minutes and an hour. You can see his extensive range of subjects below. For presentations within Devon and Cornwall areas he charges £60 for a talk which is inclusive of travel, fuel and parking charges if needed. If you wish to know more about his talks, use the contact form here or ring him on 07845 176870.

Please note that due to the Coronavirus pandemic a lot of my 2020 and 2021 talks have been rescheduled into 2022 when that year was already full ! There simply isn’t enough room in my diary for me to do any more talks in 2022 so I will be pleased to hear from you for 2023 when you start planning next year after January. That 2023 diary is filling fast so don’t delay!

It would be worth noting that I am unable to do talks on Tuesday evenings when I have long term engagements. I also take the grandchildren to school every morning so unable to do morning talks away from the local area of Tavistock.

The Poetry Trail along the length of Tavistock Canal was little know with its plagues being broken, lost, stolen and faded, so it fell into disrepair an soon forgotten. The first poetry workshops along the whole length of the Tavistock Canal took place in 2003 and involved poet James Crowden and Tavistock Primary School. In 2017, the 200th anniversary of the opening of the canal, a little group of like minded souls decided to reinstate the trail and started work in fund raising and researching. Eventually in 2021 their four-year project came to fruition and all the poetry was restore in timber from Tavistock to Lumburn. This talk takes you on a virtual journey looking at the poetry and hopefully inspiring you to put your boots on to enjoy it for yourselves.

Simon Dell’s new talk ties in to his two recently published books Tavistock’s Policing Past and Tavistock Guildhall – A story of Policing which he wrote to celebrate the restoration and opening of Tavistock Guildhall as a ‘gateway’ centre for the Cornwall and West Devon Mining Landscape World Heritage Site. His talk charts the life of this unique building which housed the magistrates’ court and police station from 1848 until 2012. That significant record made Tavistock Police Station one of the oldest purpose-built police stations in the country in continuous use. His publications also commemorate over two centuries of policing in Tavistock and West Devon, from the early years before the guildhall was built, through the centuries to when the police service moved into its new, modern home.

THE GEORGIAN IMPROVERS ON DARTMOOR (NEW)

The story of those who tried to tame Dartmoor into a productive agricultural success, the road builders, the quarry workers and the famous Tomas Tyrwhitt, friend of George IV. The hardships and privations suffered by the common man at the behest of those who would control and manage the landscape were assigned to history in the great improvements during the 18th century.

GEORGE FOX AND THE QUAKERS (NEW)

George Fox  was an English Dissenter, who was a founder of the Religious Society of Friends, commonly known as the Quakers or Friends. The son of a Leicestershire weaver, he lived in times of social upheaval and Civil War. He rebelled against the religious and political authorities by proposing an unusual, uncompromising approach to the Christian faith. He travelled throughout Britain as a dissenting preacher, often being persecuted and imprisoned by the disapproving authorities. Using the images of the world famous Quaker Tapestry Simon illustrates the life of George Fox and the creation of the Quakers right up to the present day.

The years following the Second World War saw the fortunes of Lundy take a significant turn downwards – the island supply boat, the Larina, had been commandeered by the Navy and was never to return. The years of austerity from 1945 onwards meant that the island’s infrastructure was deteriorating to an alarming degree. The owners of Lundy at that time were the Harman family, who had owned it since the mid-1920s and they were unable to resource the long-term prosperity of Lundy. It was in 1968 with the tragically-early death of Albian Harman in his 50s that a difficult and significant decision had to be made by his two sisters and widow to secure the long term future of this special place. The decision to sell Lundy was taken and it was put onto the open market.

When its sale was announced in that year, there was great public concern about the island’s future. An obvious solution was the National Trust, but it had no funds to buy it, let alone manage it from thereon. Much interest was shown by a number of organisations in purchasing the island but thankfully, in response to a national appeal, Sir Jack Hayward donated the purchase price of £150,000. The National Trust then leased the island to the Landmark Trust.

The Landmark Trust took on their greatest challenge and over the past 50 years of management on behalf of the island’s owners The National Trust, the island’s future has been turned around. With numerous properties for rent for holidays and over 15,000 day-visitors each year Lundy is a showcase example of what can be done with sensitive but effective management.

The past 50 years has seen unbelievable changes and this talk photographically charts those changes which have made the island what it is today – a vibrant, secure and well-known wildlife reserve and so much more. The future looks bright as a result of those 50 Landmark Years.

The history of Tavistock Abbey from its founding in 974AD to the dissolution of the Monasteries in 1539 and its remains in the landscape of Tavistock.

Simon was once a voluntary assistant warden on Skomer Island off the coast of Pembrokeshire and now leads guided walks there. His illustrated talk is of particular interest to wildlife groups and looks at the stunning flora and fauna of this fascinating wildlife reserve, one of the UK’s most famous islands off the coast of Wales.

TAVISTOCK CANAL AND ITS HISTORY

“Tavistock is now Devon’s “World Heritage” town and this designation was created as a result of the Tavistock Canal and the part it played in the Cornwall and West Devon mining heritage. Constructed to improve transportation from the biggest copper mines in the world in the beginning of the nineteenth century, it linked Tavistock to the port of Morwellham on the River Tamar. This talk looks at the construction of the canal and the effect it had on Tavistock and West Devon”.

A fascinating tale of truth and fiction surrounding the history of the town of Tavistock where Simon policed as the local community constable for many decades and where he became Chairman of the local history society.

The archaeological investigation of Dartmoor commenced in the late Victorian era with the formative Dartmoor Exploration Committee. Over a century methods changed significantly and in the early years of this century one of Europe’s most significant finds was made on Dartmoor using forensic science and computerised technology. This talk takes us through those decades of unearthing history from Palaeolithic times right up to modern day.

A virtual tour of the 108 mile journey along the cross-Devon long distance footpath from Wembury in the South to Lynmouth in the North.

THE FAIR ARM OF THE LAW

The Centenary of the Policewomen’s Department formed in 1915 and the history of women police in the west country.

The story of the Conscientious Objectors of the Great War held at Dartmoor Prison and a look at this significant 1917 Centenary.

A slide show looking at the history of policing the westcountry. The usual ‘policing talk’ to start with if you are new to my talks!

THREE MURDERS AND A SUICIDE

The compelling story of three historic murders which are linked together with a suicide and all of which have touched Simon’s police service throughout four decades.

Old historical murders throughout the county of Devon.

MUTINY ON THE MOOR

The story of the 1932 Dartmoor Prison riot that destroyed much of the building.

The story of Dartmoor Prison

A JOURNEY TO EVEREST

An expedition to the highest place on earth from Nepal

A virtual tour of this lovely island from your armchair, hopefully to inspire you to make a visit!

THE WILDLIFE OF LUNDY

A slide show of the wildlife of Lundy Island.

A slide show looking at historical and archival photographs of Lundy Island based upon my best-selling book of that title.

BODIES ON THE MOOR

The stories of various deaths Dartmoor

LYDFORD AND THE STANNARY LAWS

The awful story of the tin mining laws and the life of the Dartmoor tinners.

The story of the lesser known industrial mystery of the small benches on the hills of Dartmoor where street cobbles were manufactured.

I am also available to give ‘after dinner speeches’ relating to my, often hilarious, experiences of almost forty years in police uniform.

THE HISTORY OF FORENSIC SCIENCE

From the Roman times to DNA, forensic science has been used to detect crime. This talk looks at the development of forensics in that hunt for the offender.

THE LIFE OF BEATRICE CHASE

The authoress from Widecombe-in-the-Moor was a complicated character. This talk looks at who she was and the mystery surrounding her life.